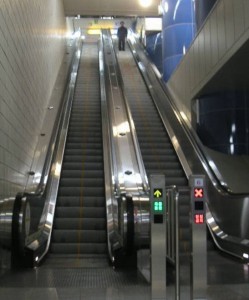 Having low immunity, I treat the coughs and sneezes of those around me like shrapnel. So when a coarse-looking man continually sneezed in my direction on the Seoul metro at afternoon rush hour, oblivious to the health of his fellow passengers, I fled to the far side of the car.

On the packed escalator to the street I heard sniffling, but this time there was nowhere for me to hide. Out of the corner of my eye I could see a young white woman diagonally behind me, also oblivious to her fellow commuters.

But I was wrong. She was crying.

The underground was surprisingly quiet for 5:30 on a Friday afternoon. Yet I seemed to be the only one who observed a woman crying on a crowded escalator.

She was alone. She didn’t have any bags, not even a handbag. It was impossible to tell if she was a tourist, student or resident. But South Korea is one of the most homogeneous countries in the world, and I concluded from her ethnicity that she was a foreigner.

She was looking down and continued to avert her eyes. She shook her head. “No,” she said.

I had expected her to nod and say she was fine. I expected her to lie, just as the people around us lied to themselves by pretending not to bear witness to her suffering.

“My brother just died,” she said.

She finally looked at me, but I couldn’t see her eyes for the tears in them. “I hate to have to be in public now,” she said. “So many people.”

But in this city of ten million it seemed to me, at that moment, there weren’t people enough.

I said, “Is there anything I can do?”

I wanted to put my hand on her shoulder. She was near enough I could have touched her without having to take a step. But I felt that might cause her more discomfort than comfort.

The escalator was finally coming to an end.